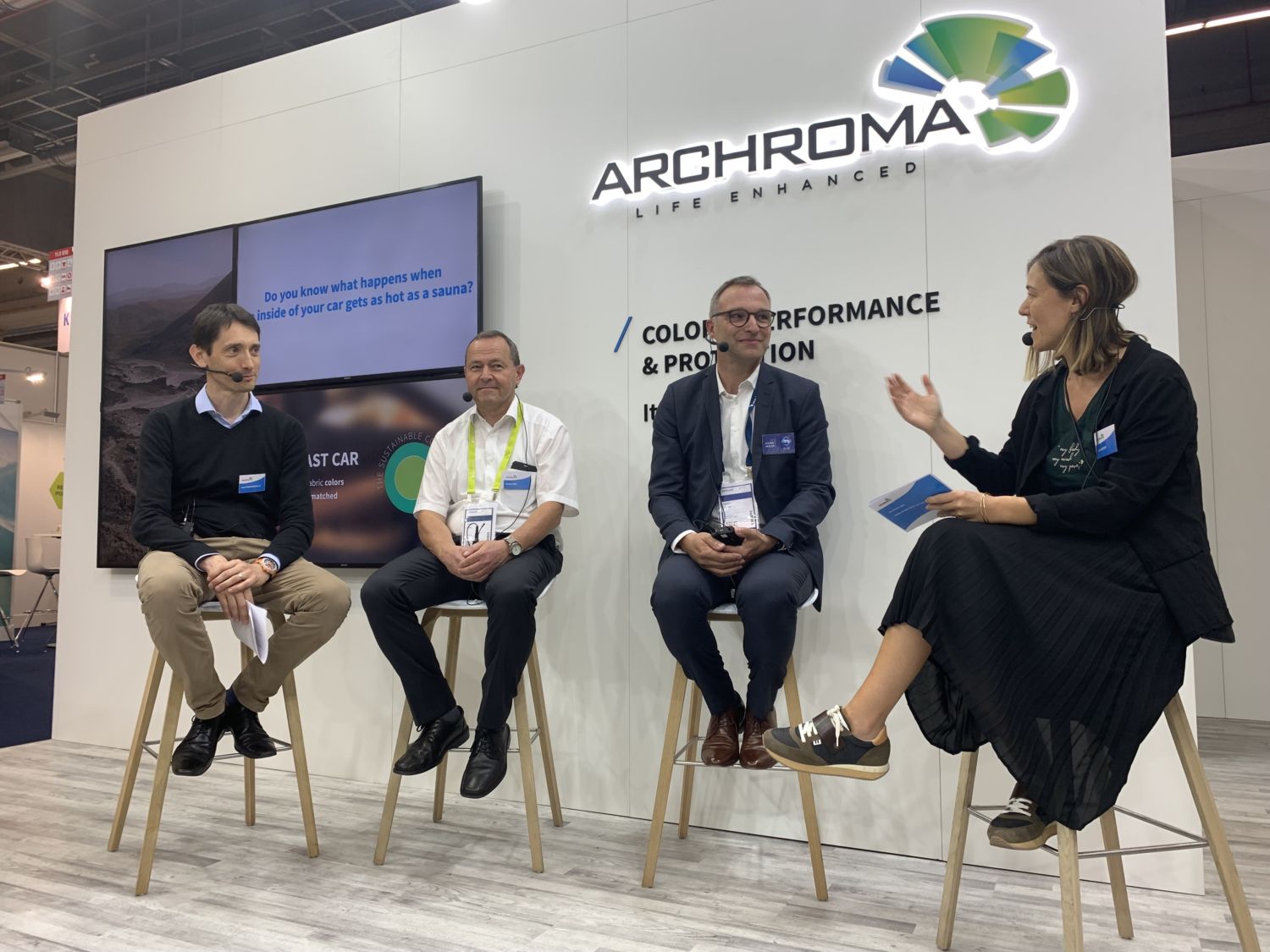 Archroma gathered three experts of Archroma and SANITIZED, our partner for antimicrobial and hygiene technologies, at the recent Techtextil exhibition in Frankfurt, Germany, to discuss odor management solutions for textiles. Also in focus: the brand new Sanitized® OX20, an odor neutralizing product out of the Sanitized® Odorex™ product family.

Odor management technologies are evolving from antimicrobials to biocide-free odor adsorbers technology. However, odor adsorbers may not be a suitable replacement for all applications, as the right technology will depend on the intended use, required performance or local regulatory context.

(In the picture above , from left to right: Yann Ribourdouille, Georg Lang, Stefan Müller, Nuria Estape)

The new biocide-free OX20 is a passive system. Could you explain the main difference in the mode of action of active and passive systems?

Stefan Müller: There are 2 ways to reduce or manage odors. One is the traditional antimicrobials, what we call the “active” approach. This is where the growth of bacteria is prevented or greatly diminished by antimicrobial active substances. No bacteria means no option for bad smells to be generated.
The biocide free technology, which we call “passive” technology, are odor adsorbers. This technology works by adsorbing the bad odors due to a significantly bigger surface. The odor adsorbers have a certain adsorption capacity. Once this capacity is exhausted, they can be washed and will adsorb bad odors again.
Antimicrobials are dealing with the reason or source of bad odors, whereas odor adsorption technologies tackle the symptom.
Their mode of action is obviously different – antimicrobials hinder the growth of bacteria and prevents thereby malodors and other unpleasant smells, whereas odor adsorber technology adsorbs the odors before they are noticeable. As odor adsorbers need to be washed from time to time (to re-load the adsorbing capacity), they are ideally for sporting textiles etc. which are easy to wash. On the other side antimicrobials are to be used for applications with especially high hygiene requirements or items which are difficult to wash like shoes, various working clothes, or home textile articles.

Does an odor absorber technology reach the same effect as an antimicrobial treatment? How do you check the efficacy of both?

Stefan Müller: Different technologies for different applications / different test setups as well.
Test methods for active systems - The effectiveness of textiles equipped with active systems can be determined by quantitative antimicrobial standard tests (static contact tests), like ISO 20743, AATCC 100, JIS L 1902. All are based on the same principle and are suitable for non-leaching AM technologies. They also allow measurement against various relevant bacterial species (Gram Neg. and Gram Pos.). The textile samples are inoculated with a bacterial suspension and then incubated. After this contact time, the number of bacteria on the samples is quantitatively determined by plating on nutrient media plates. The difference between the values for treated and untreated textiles shows how many of the bacteria were reduced by the applied active substance. Another test method for the quantitative determination of antibacterial activity of textiles is ASTM E2149. In contrast to the previously mentioned methods, this is a dynamic contact test. This was developed specifically for substrate-bound active ingredients and is particularly recommended for silane-quat technologies.
Test methods for passive systems - In contrast, passive systems have no effect against bacteria, but adsorb their released odor. For this reason, a different measurement method is required. ISO 17299 can be used to determine the odor adsorption efficiency of a textile. Specifically, ISO 17299-3 involves placing a defined amount of isovaleric acid (responsible for body odor or perspiration odor) in a bottle together with the textile. After reaching equilibrium, the amount of odor molecules is quantified by gas chromatography. By comparing this value with the initial concentration, the odor reduction rate of the finished textile can be determined.

Have you seen an increase of the demand of odor absorbers technology in the last years?

Georg Lang: Yes, there is a strong demand for an odor adsorption effect, mainly in the sportswear area, but also in leisure wear, underwear, and other areas where end consumers face the creation of unpleasant smells.
If course, there are some markets in which the alternative (odor adsorber) technology is not sufficient to meet the requested performance, for instance mattresses that cannot be washed or end-articles which require a treatment with antimicrobial products to prevent the growth of bacteria, molds or fungi.

What is the evolution of the worldwide biocide regulations?

Yann Ribourdouille: There is an increasing concern from citizens and authorities about the risk and hazards for health linked to exposure to chemicals. This is especially true for biocide which by essence trigger effect on living organisms.
Due to that lot of countries either implemented new regulations or strength their biocide regulation with new data requirement e.g. the duty to inform user about hazard (labelling requirement).
We see this trend in Europe with BPR (2012) or US Federal Insecticide, fungicide, and Rodenticide Act (FIFRA) and all the new local biocide regulations that appear or will come soon like Korea (K-BPR in 2019) and partly in India.

Is there a difference regarding sustainability aspects between active and passive technologies?

As there are different substances are used in the active technologies, this can’t be answered in general terms. What can be said however is, that metal free technologies most likely win against metal technologies, as the mining of metals is a very energy rich process. Our actives are applied to textiles in very small amounts and are fixed on the textile so that they can withstand multiple laundries. Therefore, they add comparatively little to the CO2 Footprint of a clothing item. They can however help consumers tremendously in saving energy, as odor management technologies enable that clothing can be worn longer before needing a wash, which results in less washings and therefore saved energy, water and washing liquid.

Active odor management technologies fight bacteria – how can be ensured that they don’t inflict harm on the wearer or processor of textiles?

Yann Ribourdouille: The biocide regulation allows only a selection of well-known chemicals for specified uses. We can therefore ensure, that according to current knowledge our technologies do not pose a risk to wearer nor to processors if used correctly. Our role is to guide textile manufacturers in the best possible application process to protect the worker and the final user.

How many wash cycles can these finishes withstand? Is there a difference between active and passive technologies?

Georg Lang: We test for 50 home laundries. This is our benchmark for both technologies.

How do you explain the odor adsorption mechanism?

Stefan Müller: By applying our passive technology on a fabric, the specific surface of the fabric is increased substantially. This property leads to an adsorption effect of odor which can be measured by GC-MS. In principle the surface is a sponge-like structure that catches odor molecules. The odor molecules in the sponge-like structure will be released through home laundries.

Can we expect more novelties in the odor management field in a short future?

Stefan Müller: Our approach is to develop global technologies, but we’re open as well to solve local market issues, like for example the demand for ammonium adsorber technologies in China.
In China, customers want an odor adsorber, which not only works for IVA (isovaleric acid) but also for NH3 (ammonia). This needs other technologies. Another field we look into is the development of natural based odor adsorber technologies. In this context we’d like to point out that our main focus remains on the reduction of body odors.

ARCHROMA AT A GLANCE

Archroma is a global, diversified provider of specialty chemicals serving the branded and performance textiles, packaging and paper, and coatings, adhesives and sealants markets. Headquartered in Pratteln, Switzerland, Archroma operates in over 100 countries, with 2,800 employees located in 31 countries and with 25 production sites.
Archroma is passionate about delivering leading and innovative solutions, enhancing people’s lives and respecting the planet. Because it’s our nature.
www.archroma.com

SANITIZED® ODOREX™ AT A GLANCE

Sanitized® Odorex™ technology ensures that odor molecules do not adhere to the textile fibers. Furthermore, Odorex™ adsorbs and neutralizes unpleasant odors as soon as the clothing is worn. The wash-resistant efficacy against sweat odor on sports textiles was proven both in the laboratory and in comprehensive practical tests. Sanitized® Odorex™ meets the guidelines of bluesign® and OEKO-TEX®. The technology complies with all global approval requirements and is not subject to the European Biocidal Products Regulation (BPR).
www.sanitized.com/